GBPJPY stripped above the 200-period simple moving average (SMA) around 150.93; however a positive momentum seems to be weak and is currently unable to raise the price much higher. No definitive price direction is delivered by the SMAs, however the 50-period SMA is poised to positively surpass the 100-period SMA, adding some confidence to a bullish price.

However, the pair remains within the limits of short-term trading range between 149.04 and 151.93-152.27, while the technical oscillations indicate that positive sentiment is struggling to recover. The MACD, slightly above zero, is strengthening above its red trigger line, while the RSI is trying to regain its positive trajectory by rebounding from the upward line. Opposing the current price picture is the stochastic oscillator, which has become bearish and promotes a negative retreat in the pair.

In summary, GBPJPY shows a neutral-to-optimistic bias as the price holds itself above the 200-period SMA. A break either above 152.27 or below 149.04 could see a clear price direction to start evolving. Furthermore, the broader bullish bias can be questioned if the price were to change below the 148.51-148.70 limit. 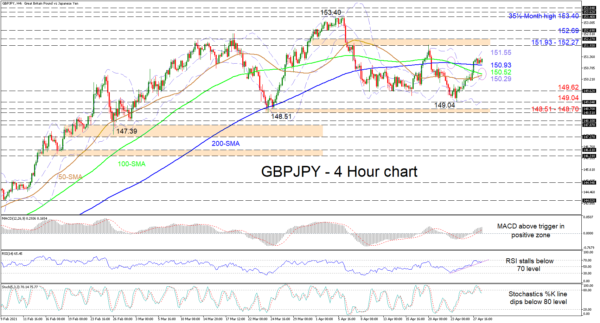