Canada will announce its inflation data for the month of May at 12:30 GMT on Wednesday. Global economic activity is growing while COVID-19 events are declining in many nations and vaccine coverage is increasing. However growth is still uneven across the country. Will the moon rise again after a few days of losses?

The projection for the monthly CPI should fall to 0.4% in May from 0.5% in the previous month. The annual inflation rate is forecast to rise to 3.5% from 3.4% previously, holding well above the mid-term target of 2.0%. The previous reading was the strongest since May 2011. 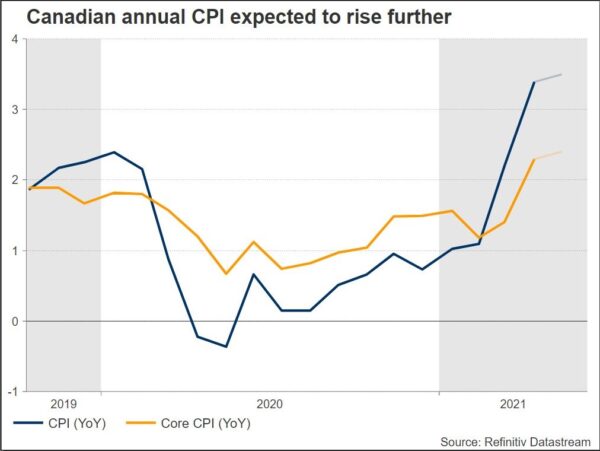 Due to base effects and considerably higher fuel costs, CPI inflation climbed to approximately the top of the 1-3% inflation control zone, as expected. Core inflation has also risen, largely for temporary reasons, albeit by a much smaller amount than CPI inflation. While CPI inflation is forecast to hover close to 3% over the summer, it is forecast to moderate later in the year as base profits disappear and overcapacity is practiced downward.

Economic events in Canada largely followed the forecast in the April Monetary Policy Report (MPR). In the second wave of the coronavirus pandemic, GDP growth in the first quarter was strong 5.6% per year. While this was lower than the Bank predicted, the fundamental facts show increased confidence and strong demand. Household spending was higher than expected, but business spending was lower than expected. Workers in contact-sensitive industries were again the hardest hit, according to recent jobs.

The Canadian economy is projected to rebound significantly this summer, driven by consumer spending, as immunizations are progressing faster and provincial control restrictions are easing. Despite advances in immunization, the emergence of new variants of Covid-19 remains critical. The risks to the inflation outlook mentioned in the April MPR remain significant in a broader sense.

As for FX markets, dollar / moon has gained some ground over the last few sessions, staying close to the six-year low of 1.2012. If the numbers exceed expectations, they could strengthen the Canadian currency, pushing the dollar / currency pair down to 1.2012 and the 1.1920 support, reached in May 2015.

On the downside, disappointing CPI figures could see the pair re-challenge the resistance around the 40-day simple average moving average (SMA) at 1.2200 ahead of the 1.2365 barrier. Across that hurdle, the road would open to 1.2645 and then to the 200-day SMA around the 1.2750 line. 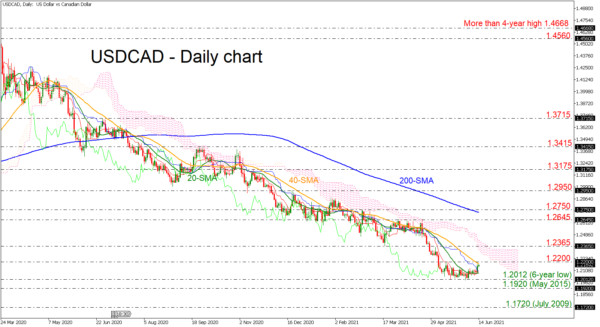 AUDUSD continues its run to the downside

Gold Falls Below $1650 as US Dollar Soars