The U.S. dollar maintained a firm tone and reached a three-month high early Thursday, after 2.44% monthly in June, mainly driven by a sharp change in the Fed’s exchange rate outlook. The dollar index looks for further advance after completion of a shallow correction (92.38 / 91.50).

Traders are wary, however, as massive weekly cloudy and overbought conditions in both, daily and weekly charts, can produce strong headwinds and also focus on tomorrow’s U.S. job data, which is expected to be a key driver and could push the dollar in both directions, depending on the result.

High-quality June figures would show accelerating a recovery in the U.S. labor market that could support a dollar.

On the other hand, weaker expected numbers would signal that labor market growth continues to struggle, which would be negative for the dollar. 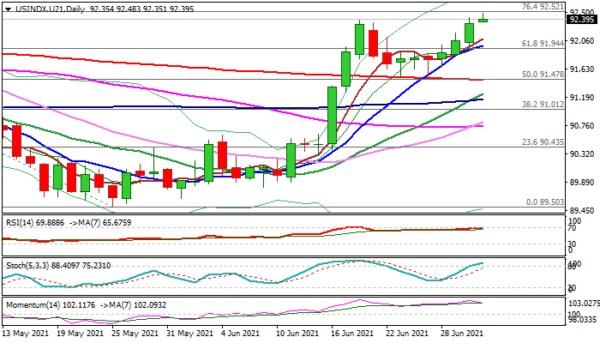