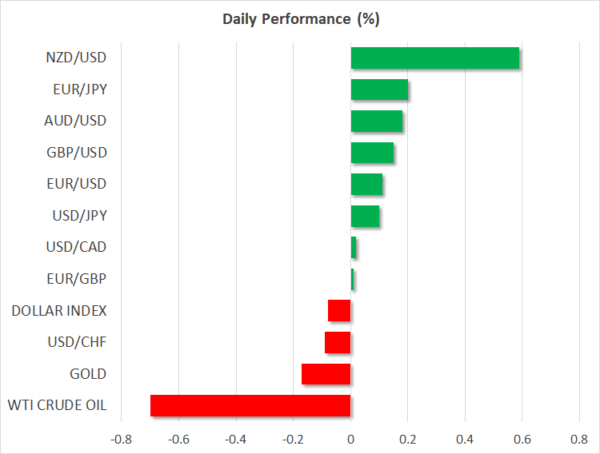 Concerns about how further spikes in inflation could start hurting corporate spending and also prompting the Federal Reserve to speed up its tight schedule weighed on Wall Street on Wednesday. With signs that consumer spending in the U.S. is rising and burning price pressures far from cooling, investors are nervous that the Fed will take its foot off the gas a little faster than it currently plans.

The S&P 500 and Nasdaq Composite closed down 0.3% lower yesterday, while the Dow Jones fell a steeper 0.6%. The losses came despite an impressive set of revenue from the U.S. retail giants this week. There is growing concern that the ongoing broad supply constraints and rising input costs will dampen revenue in the coming quarters even as many businesses appear to be struggling well with those challenges in Q3.

However, there has been no suggestion from the Fed that it is even considering changing course of decline and the real debate is around the timing of removal and how many rates would follow after that. Markets are probably just nervous about the uncertain inflation outlook and Wall Street futures are back in positive territory today.

Retailers will remain in the spotlight for the rest of the week, and Macy’s and JD.com will report their results before the market opens.

Elsewhere, technical stocks were under pressure in Hong Kong due to concerns about a slowdown in revenues and further regulatory crackdowns by Chinese authorities. However, shares in Tokyo have been lifted by reports that the Japanese government’s next stimulus package will be much larger than expected. In Europe, stocks were mostly higher, looking at recent record highs.

The recent dip in the euro is likely to help boost the mood in European stock markets. The single currency has declined by more than 7% against the U.S. dollar in the year to date, slipping 2% so far only in November. However, the sell-off appears to have eased overnight and the euro rebounded slightly from yesterday’s 16-month low of $ 1.1262 to climb back above $ 1.13.

The pound, meanwhile, is extending its steady recovery from last week’s lows, currently testing the $ 1.35 level as investors grow more confident that the Bank of England will raise rates in December. Against the euro, sterling rubbed a recent 21-month high of 0.8381 earlier in the session.

However, today’s biggest gain is the New Zealand dollar, which jumped around 0.6% after the RBNZ’s quarterly trade survey indicated that firms ’inflation expectations are sharply rising. Both one- and two-year inflation expectations went higher, with the former reaching an 11-year high, boosting expectations that the RBNZ could raise rates by 50 bps at its policy meeting next week.

The green dollar was softer but stable, marginally lower against a basket of currencies. The rise of the dollar seems to be slowing as the Treasury’s yield has retreated from its recent highs.

The biggest loser on Thursday was the Turkish lira, which continues to fall across the board, hitting a new all-time low of 10.9785 against the dollar.

Turkey’s central bank is widely expected to again lower interest rates later today when it announces its policy decision at 11:00 GMT. President Erdogan has left investors in doubt that a big tax cut will come after a promise yesterday to take his fight against high interest rates “until the end”.

In commodities, gold struggled to break past resistance around $ 1,870 / oz even as yields and the dollar retreated.

Crude oil prices have also been headed south amid a push by Washington for other countries to join their plan to free up oil from strategic reserves. President Biden reportedly called on China, Japan, India and South Korea to use their reserves to alleviate the energy crisis after OPEC refused to bolster its supply. Although no decision has been made, China appears ready to join the United States in coordinated action to ease the pressure on rising fuel prices.

WTI futures last traded at six-week lows below the $ 78 / barrel, starting the week above $ 80, while Brent futures defended the $ 80 / barrel.