Gold prices are declining following the withdrawal of the five-month high of 1,877, which was posted last Tuesday. The stochastic is approaching the oversold territory with strong momentum, while the RSI indicator is heading south in the positive region. However, the 20- and 40-day simple moving averages (SMAs) crossed the 200-day SMA higher in the previous sessions.

To the top, there is immediate resistance at the five-month high of 1 877 before the bulls drive the price to the 1 916 high, reached on June 1st. Even higher, the bullish bias would be approved if the goods hit the 1 965 barrier.

Overall, the yellow metal has been on an upward movement since September 29 and any close above 1,916 could confirm the recent bullish bias. 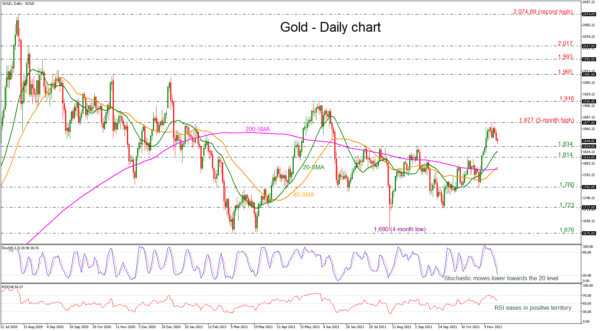