More and more developed central banks are emerging with the pace of political tension in the United States. This morning the Reserve Bank of New Zealand raised its exchange rate by 50 points to 2.0%, repeating its move in April. Analysts were expecting the decision, but NZDUSD strengthened by 1.4% to levels above 0.6500 hours after the decision.

Buyers were drawn to comments from the RBNZ about its willingness to continue tightening monetary conditions. In today’s commentary, policymakers point out that raising the rate faster and faster reduces the risk of inflation becoming sustainable. In its very sharp comments, the RBNZ alludes to a willingness to slow down economic demand, ie slow growth.

Since the beginning of last week, the NZDUSD has shown big gains after touching levels near 0.6200. Technical analysis shows a relatively bullish outlook for the pair. The RSI index reversed growth on the weekly time frames after touching oversold levels. On the daily charts, the bullish divergence of the RSI and the price chart also indicate the potential for further growth. 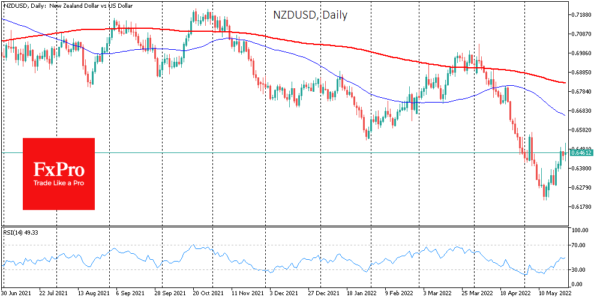 The NZDUSD corrected 23.6% from the peak of February 2021 to the bottom of early May 2022, possibly paving the way for a stronger recovery to 0.6700 due to the last rebound. However, with the RBNZ’s decision and the country’s favorable export conditions, we could well see the start of an extended kiwi trend, which could return to 0.7200 in the next 12 months.

The RBNZ’s example looks like one of the first indications of a broader trend where other global central banks will adopt the Fed’s rate hike. Maybe they can surpass it, as they have done so many times in history, which would form a withdrawal of the dollar after almost a year of gains.