EURJPY stepped on the near-term uptrend as it halted last week’s retreat from the new eight-year high of 145.62.

With the price trading comfortably above its upward-sloping simple moving averages (SMAs) and the momentum indicators hovering within the bullish territory despite their flat trajectory, upward moves are more likely than downward ones. Specifically, the RSI is a long distance above its 50-neutral mark, while the MACD is well elevated within the positive zone and near its red signal line.

Continued movement above June’s hard ceiling 144.26 could be the key to a boost to the important long-term resistance line that unites all the highs of August 2020, currently seen around 146.45. A break above the 147.15 barrier could then pave the way to the 2014 top of 149.76 and the 150 psychological mark, where the ascending line drawn from the March lows is positioned.

Overall, EURJPY may push higher highs in the near term, with traders waiting for a clear confirmation signal above 144.26 to boost buying exposures. 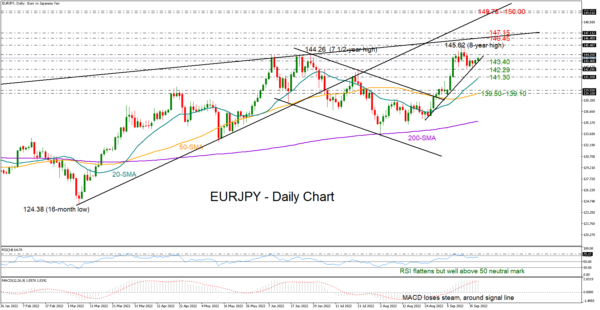