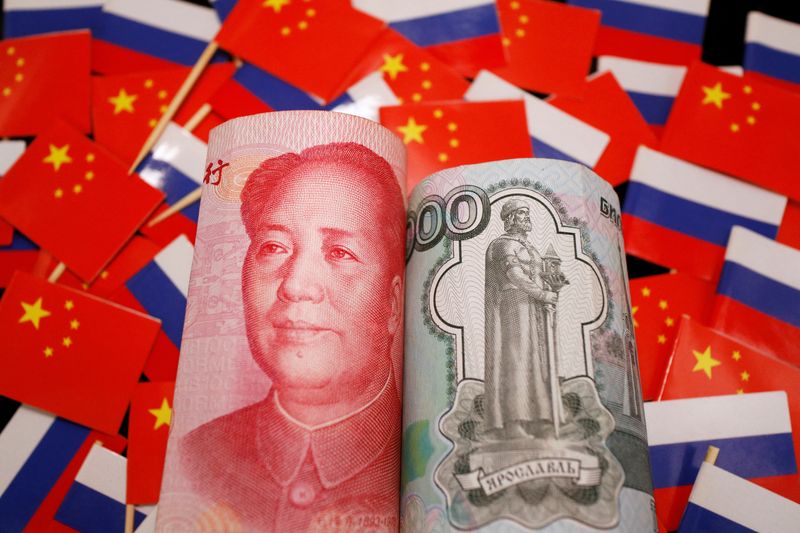 © Reuters. Chinese yuan and Russian ruble banknotes are seen amid flags of China and Russia in this picture taken on September 15, 2022. REUTERS/Florence Lo/Illustration

MOSCOW (Reuters) – Russia’s top business lobby called on Friday for the central bank to build up its reserves from the to stabilize the ruble, which is susceptible to wild bouts of volatility and has been trading near multi-year highs.

The Russian Union of Industrialists and Entrepreneurs (RSPP) said Russia needed to step up its purchases of the yuan and currencies from other “friendly countries” to help “stabilize” the value of the Russian currency.

The ruble has risen under Moscow’s strict capital controls and a drop in imports. Russian businesses say that a strong currency hurts their competitiveness and the government favors an exchange rate of 70-80 against the dollar.

The RSPP said Russia’s Finance Ministry should issue yuan-denominated bonds, which can then be bought by both the central bank and private investors. Selling rubles to buy foreign currencies should weaken the value of the Russian currency by increasing its supply on forex markets.

Before being hit by unprecedented sanctions that froze about half of the central bank’s international reserves, Russia used to buy tens of billions of dollars of foreign currencies and gold every year.

Moscow has since stepped up a campaign to reduce the role of the dollar, euro and other Western currencies in its financial system.

Moscow Exchange, Russia’s largest stock market, said earlier this week that it expects trading volumes in the ruble-yuan pair on its platform to surpass dollar-ruble next year.

In a letter to the finance ministry and central bank, the RSPP also called on the country to “step up its efforts … to provide financial institutions from friendly countries with access to Russia’s exchange infrastructure.”

Russia has locked out banks and investors from most foreign markets since February. Moscow considers “friendly” countries those that have not imposed sanctions on Russia since it launched military actions in Ukraine.