GBPUSD climbed higher on Thursday, but encountered resistance today at 1.1228, still below the short-term bearish line drawn from the August 10 high and also below the longer bearish line drawn from the March 23 high. This keeps the dominant downtrend intact but given that the pair has formed higher lows on the 4-hour chart this week, a break below 1.0765 may be needed to signal that the bears are back in full control.

The RSI lies near its 70 line, but it has shifted downward recently, while the MACD remains above its zero and trigger lines, still pointing upwards. The mixed indications provided by the oscillators enhance the view that traders may need to wait for clearer signals before they become confident of bearish continuation.

A decline below 1.0765 could confirm the break below the line connecting the higher lows formed this week and may encourage the bears to dive towards Wednesday’s low of 1.0540. If they do not exit the action from there, a break lower could take the losses to Monday’s low of 1.0325.

On the upside, a break above 1.1465 could confirm the break above the 200-period exponential moving average (EMA) as well as the break of the downtrend line drawn from the August 10 high. That said, this can only signal a bigger upside. a correction, possibly to the September 13 high at 1.1735 or the longer-term lower line taken from back in March. A trend reversal could be tabled on a decisive break above the 1.1900 area, marked by the August 26 high.

In short, GBPUSD extended its recent recovery but remained below two major lower lines, something that keeps the dominant downtrend intact. However, the fact that the pair printed higher lows this week probably paints a neutral picture in the near term. 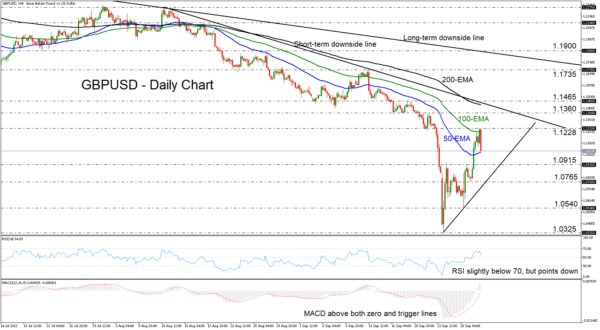 When Does a Bear Market Rally Become a Bull Market?