The Australian dollar is higher against its US counterpart on Tuesday, after the daily Tenkan-sen (0.6591) provided firm ground for a four-day pullback from the November 15 peak (0.6797).

Aussie has regained traction on renewed risk mode, but fresh advance faces headwinds from daily cloud top, boosted by 10DMA (0.6653), also near pivotal Fibo barrier at 0.6665 (38.2% from 0.6797 / 0.6584) although shallow easing so far suggests that bulls continue. to grasp and maintain a pivotal barrier under pressure.

Daily technicals are optimistically aligned and support the action, which must clearly break above a daily cloud to generate an initial signal of a reversal, which would require additional support on an extension above 100DMA / 50% pullback (0.6691).

Caution on failure at cloud top, which would soften near-term structure, but bias is expected to remain positive as the action holds above daily Tenkan-sen. 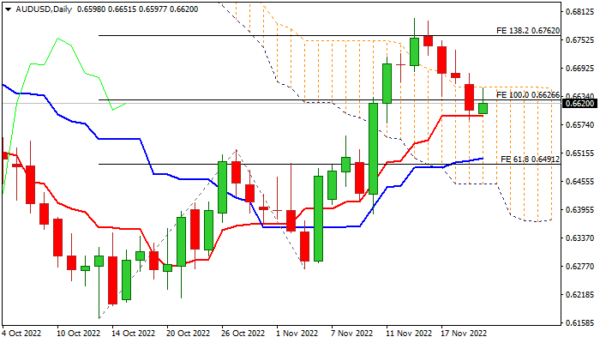 ADP Warns of a Turning Point in the Labour Market