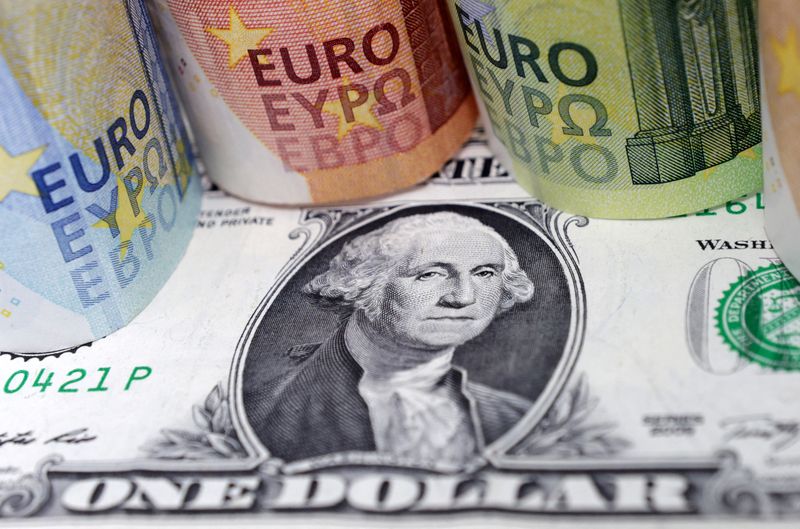 By Harish Sridharan and Joice Alves

(Reuters) – The yuan jumped against the dollar on Tuesday amid hopes of a possible relaxation of the country’s strict pandemic restrictions after an unprecedented episode of unrest.

The euro rose ahead of inflation data due on Wednesday.

China will speed up COVID-19 vaccinations for the elderly, health officials said on Tuesday, aiming to overcome a key stumbling block in efforts to ease unpopular “zero COVID” restrictions.

“People are getting pretty excited about any sort of reopening,” said Alvin Tan, head of Asia FX strategy at RBC Capital Markets.

The US dollar, which rose in the previous session on growing concerns about China’s COVID-19 situation, fell 0.4% to 106.19.

Police on Monday stopped and searched people at the sites of weekend protests in Shanghai and Beijing, after crowds there and in other Chinese cities demonstrated against the country’s strict zero-Covid policy.

Protests have spread to at least a dozen cities around the world in solidarity.

European Central Bank President Christine Lagarde said overnight that euro zone inflation has not peaked and risks being even higher than currently expected, hinting at a series of interest rate hikes ahead.

Flash eurozone inflation figures for November are due on Wednesday, with economists polled by Reuters expecting inflation to come in at 10.4% year-on-year.

Before that, figures showed on Monday that Spain’s consumer prices in the 12 months to November rose by 6.8%, a slower pace than the previous 7.3% figure marked in October. Inflation numbers from Germany are expected later on Tuesday.

“The consensus is for German headline inflation to stabilize at 10.4% and eurozone figures to slow slightly tomorrow,” said Francesco Pesole, FX strategist at ING.

“It’s hard to see this significantly changing the ECB’s narrative, but an above-consensus print may prompt markets to seriously consider a 75 basis point hike in December”.

The greenback remained marginally supported by hawkish speakers from the Federal Reserve overnight.

Comments from Fed Chairman Jerome Powell on Wednesday will be watched for new signals of further tightening, with key US jobs data for November due on Friday. The US central bank is widely expected to raise rates by another 50 basis points when it meets on December 13-14.